We have established Kayleigh’s Wee Stars to provide financial support for families where a child has a terminal illness. Kayleigh’s Wee Stars is based in Oldmeldrum, Aberdeenshire and is run by 5 trustees and our CEO, who all work together to maximise the charity’s fundraising efforts to enable families to be supported when they need it most.

When our beautiful daughter was diagnosed with a terminal brain tumour, we made it our mission to do everything we could to make her last few months as precious and comfortable for her as we could. We wanted to make happy memories.

Alongside our families, we supported each other to remain strong during what was a very difficult time. After 6 months full of adventures, Kayleigh passed away in June 2012, snuggled in our arms.

We decided to set up Kayleigh’s Wee Stars in our daughter’s name to help other families make memories. Everyone’s circumstances are different and we aim to take the financial burden away from parents to allow them to spend time with their child when it matters most.

We are both Primary School Teachers, and as such, the only way we are able to continue the great work of the charity, is due to the teamwork between our family, our Trustees, our CEO, Fiona and our fabulous fundraisers. Without the support of fundraisers and local businesses who support us, we would not be able to keep making this important difference to the lives of so many terminally ill children, and their families, across Scotland.

We live in Oldmeldrum, Aberdeenshire, and Kayleigh’s Wee Stars now has 2 extra loyal supporters - Kayleigh’s younger sisters; Charlotte and Emma born in 2013 and 2015.

Thank you everyone for all of your ongoing efforts.

A close friend of both Anna and Jonathan, Nicola became involved with Kayleigh’s Wee Stars from the outset, when the couple decided to establish the charity to support other families looking after a child with a terminal diagnosis.

Nicola’s daughter, Olivia, was one of Kayleigh’s best friends, and the two girls spent much of their time together playing and having sleepovers. Nicola can be found working hard behind the scenes at the charity’s fundraising events, ably supported by her children cheering on the participants, and Olivia waving the flags in support.

Keith arrived one day in the lead up to our first charity event, the Inverness Marathon and 10k – and just didn’t leave! He can be found helping wherever he can at our events and behind the scenes supporting the other trustees.

Following in Johnny’s footsteps, Keith has made the cross over to triathlon and had ambitions for his first Ironman 70.3 in 2020, this is now happening in 2021 where he will be flying the KWS flag proudly.

Like Nicola, Ewan has been part of the charity from the beginning. He became a trustee following his initiation test of completing Edinburgh Marathon, which he completed successfully, albeit minus one sock!

Ewan is always supporting KWS behind the scenes, providing his enthusiasm and ideas to the charity. He is also the best leisure wear folder we have, so he is to thank for the presentation of the KWS Cycle Shop at Ballater each year!

What the charity does

Since 2012, Kayleigh’s Wee Stars has built strong connections in hospitals and hospices across Scotland to ensure families know about the charity and work closely with their dedicated health professionals to provide the support they need. To date, over 700 families have been supported and over £1million paid out in grants.

The charity is solely funded through fundraising from their own events, opportunities to participate in additional events as an affiliated charity, and from people choosing to fundraise for the charity through a variety of means – whether a sporting event, work / school-based challenges or memorial collections.

Applications are submitted by the health professional on behalf of the family with details of the support required, and subject to approval, are typically turned round in 48 hours to ensure families receive the help at the time they need it most.

As the charity has grown, we’ve recruited a new CEO, Fiona, to be based in our charity office in Oldmeldrum. Fiona took up the role in October 2021 at a pivotal moment for the charity, as we move from being a Charitable Trust to a Scottish Charitable Incorporated Organisation (SCIO). As well as managing the strategic direction of the charity and its day to day operations, Fiona will also dedicate her time to supporting our charity fundraising events, our affiliated events and individual fundraisers. Working closely with the trustees, their overall aim is to maximise the charity’s fundraising efforts to continue to provide vital support to families where there is a child with a terminal illness.

In July 2020, the charity office moved to new premises in Oldmeldrum. Patriot International, established in 2002 to provide turnkey service solutions to the oil and gas industry, has provided office and storage space to Kayleigh’s Wee Stars within their Oldmeldrum base at North Meadows. We really appreciate Patriot offering us the space and helping us move in, and we really enjoy working alongside their team in our new home!

Graeme Duncan, UK Manager for Patriot International stated: “We are glad to be in a position to partner with KWS and look forward to supporting this fantastic charity in the future.” 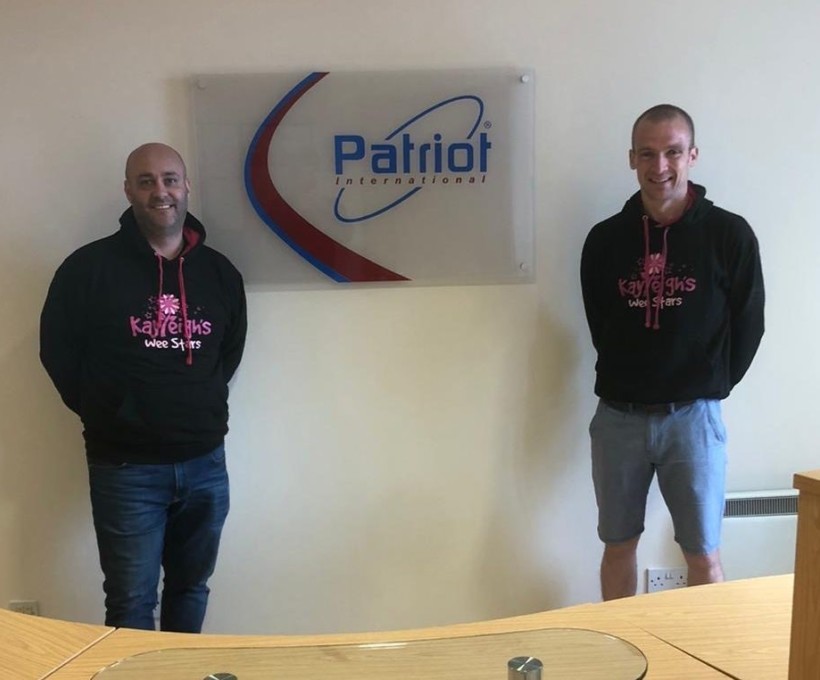 We need your support to ensure we can continue to help brave families make precious memories together.